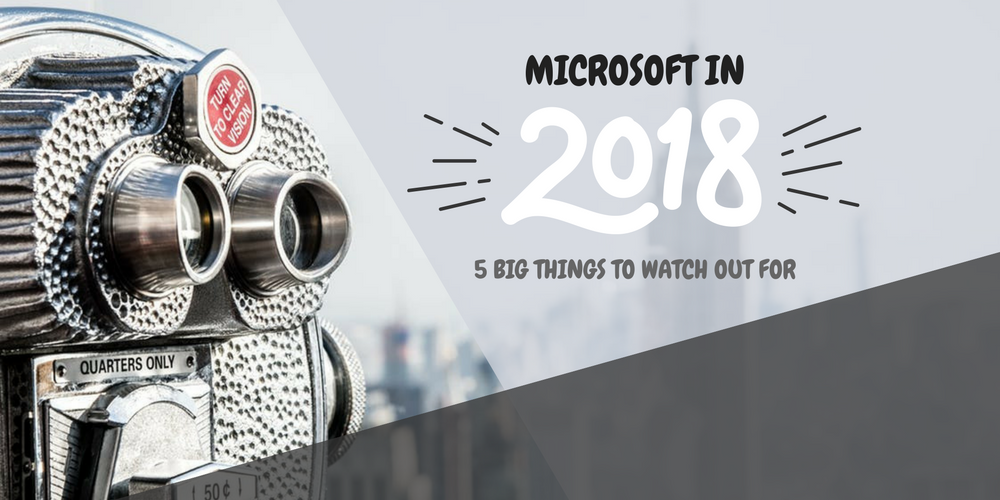 With a major revamp of its Dynamics 365 products’ licensing model, the release of Microsoft 365, its foray into the team collaboration app market, and the unveiling of the revolutionary HoloLens headset, 2017 has been a busy year for Microsoft business products.

The company is already shaping up to continue its mission to help every person on the planet do more in 2018, with new products and updates penciled in for release in the new year.

If you’re a user of Microsoft’s vast suite of enterprise and business offerings, here are five things to look out for in 2018.

Office 2019 is scheduled to arrive in the second half of 2018, with preview copies set to be issued in the middle of the year. The new version will include all the usual Office standards, such as Word, Excel, PowerPoint, and Outlook client apps, as well as server versions of Exchange, SharePoint, and Skype for Business.

Microsoft hasn’t commented on whether it will continue to release perpetual, on-premise versions of Office beyond Office 2019, but given its recent restrictions for non-cloud users, its patience with those slow to adopt may not be infinite. In early 2017, Microsoft announced that non-subscription Office users will lose access to its cloud services, including hosted email and online storage, in 2020.

There’s no word yet on how much Office 2019 will cost, though as a benchmark, Office Home & Student 2016 costs $149.99 for a single user, and that doesn’t include Outlook, Publisher, Access, Skype, or OneDrive. So chances are pricing for Office 2019 will be a little steeper than that.

The latest edition of Dynamics GP is set for release on December 1st 2017, and looks set to offer on-premise Dynamics users a lot of improved features. Dynamics NAV 2018 is also penciled to go live on the same day, however, its updated on-premise version and its new cloud-based version won’t be available until Spring 2018.

Early next year, Dynamics NAV 2018R2 will roll out as the most up-to-date version of NAV for non-cloud users, while a new cloud-version of NAV, currently code-named Dynamics 365 Tenerife, will replace Dynamics 365 for Finance and Operations Business Edition for Dynamics 365 subscribers.

Tenerife will represent the ERP arm of the cloud suite for SME users, as Microsoft does away with Business Edition altogether.

An expansion of Dynamics 365 Finance and Operations Business Edition, equipped with the full functionality of Dynamics NAV, resellers of Tenerife will have the option to rebrand it under a name of their choosing, and simply market it as “powered by Dynamics 365”. Despite Microsoft’s early announcements, partner backlash caused the company to renege on this plan, and rebranding will be a choice rather than a requirement.

Whether or not partners opt to stick with Microsoft’s yet-to-be-announced product branding or create their own, those who are part of Microsoft’s Cloud Solution Provider programme will have the option to sell Tenerife as either a standard cloud version, or bundled as a custom cloud solution alongside their own products.

The release of Dynamics 365 Tenerife is just part one of the major changes on the cards for Dynamics 365 in 2018. As Tenerife replaces Business Edition for smaller businesses, the structure of the suite will also be altered to give users more flexibility when it comes to building a solution that meets their needs.

Dynamics 365 for Talent was the first of the apps to have parts of its functionality made available in smaller, modular offerings when Attract and Onboard where released in November, and segmental apps for other products within the suite are scheduled to follow in 2018.

Talent will also spawn another modular HCM app in the new year when Dynamics 365 for Talent: Gauge hits general availability. Currently, in private preview, Gauge will help hiring managers to test the skill sets of potential candidates, and whittle down applicants before they reach the interview stage.

The option to choose only the functionality users require, and the ability to add to their solution as and when they need to, is likely to open the door to digital transformation for many businesses who want to start small and build, rather than throw out all their current processes at once.

Right now, we don’t know how the full pricing model for the modular apps will look, and what sort of discounts users can expect when combining certain portions of the suite, but what we do know is how much Dynamics 365 for Talent’s modular apps are being sold for at present.

An expansive team communications and project management app, Teams boasts a huge number of features to help teams collaborate, connect and stay up to date with their ongoing workloads, but when it was rolled out in late 2016, it did not include the voice and video conferences abilities of Skype for Business.

Keen to provide a one-stop-shop for business communications, however, Microsoft has been working hard to bring those functions to Teams, and thus eradicate the need for Skype for Business altogether. Earlier in the year, Microsoft added a voicemail feature to Teams, and in Q2 2018, we can expect to see further expansion of Teams’ functionality.

Features on the cards for next year include: chat screen sharing with guest users outside your company; meeting room support for Skype Room Systems and cloud video interoperability capabilities, that allow third-party meeting room devices to connect to Teams meetings; the ability to use your existing telco voice line to activate calling services in Office 365; meeting recording, transcription, and storage; and key search term functions for past meetings.

In an age of constant, global connectivity, businesses need to be mobile in order to keep up with competition and make the most of opportunities.

So, having accessible business processes that can travel with you, and devices that can maximize productivity on the go, is key for modern companies. If you use Microsoft business tools, from Outlook to OneDrive to Teams, there are ways you can access the information and functions you need in the field, but we’re still yet to see a great Microsoft-first mobile device.

Although Microsoft has pretty much given up the ghost when it comes to the Windows Phone, if rumor is to be believed 2018 may actually be the year that that gap gets filled.

What we know for sure is that Microsoft is working on a foldable, pen-based device, said to be codenamed Andromeda, that runs on Windows 10 and acts akin to a hinged digital notebook. According to patents recently filed by Microsoft, it appears the device may also boast the ability to display holograms on its dual screens. With the continued success of its latest Surface products behind it, it would make sense that such a device could end up being released as a Surface Phone, especially as the device is rumored to have telephonic capabilities.

Whatever the final incarnation of this product, however, it’s unlikely to be a competitor to Apple or Android phones, and will probably be marketed as a new Surface device for education or enterprise.