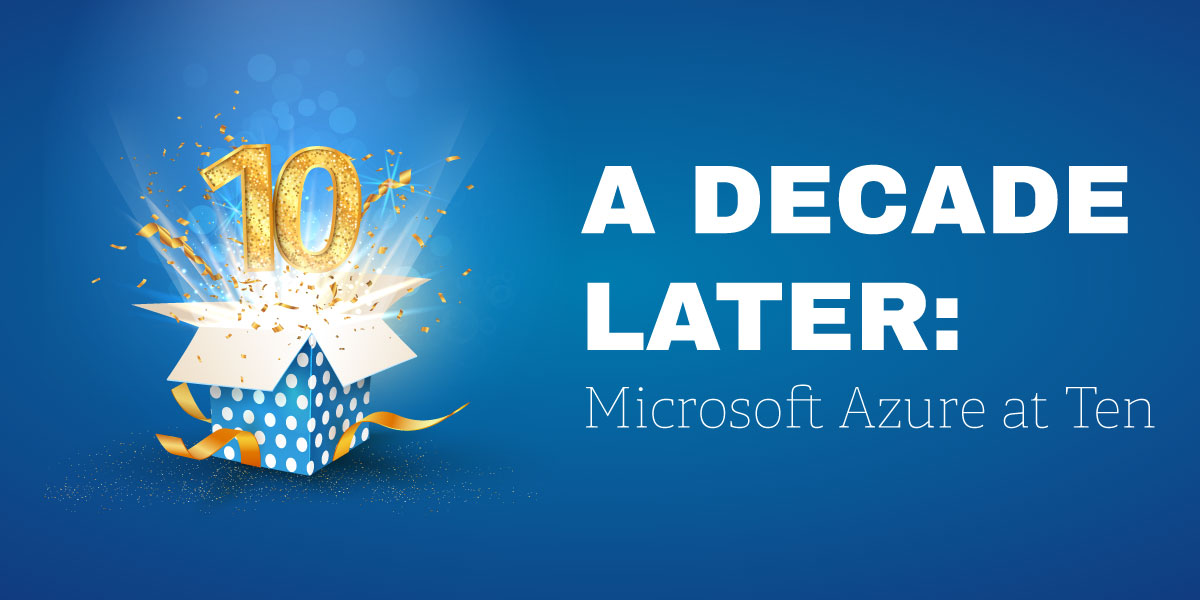 The codename Project Red Dog might not mean much to IT aficionados in 2020, but dial the clock back 12 years and it was a label whipping up a storm on message boards and across user groups in the tech community.

Within two years, Project Red Dog had evolved. Gone was the mysterious title and the veil of secrecy. The name on everyone’s lips no longer carried any covert complexities. That name was Azure.

Originally titled Windows Azure upon its official launch in February 2010—a moniker that would change to Microsoft Azure some four years later—the cloud platform has changed the face of computing on a scale previously unimagined.

A decade on, the service has arguably developed beyond recognition, expanding and adapting at regular intervals to help businesses of all shapes and sizes. The freedom to build, deploy and manage applications on a global scale is just one consequence, with 95% of Fortune 500 companies putting their faith (and trust) in the product.

To mark the platform’s tenth birthday, we sat down with Azure Stack consultant Mark Scholman, Microsoft Senior Cloud Advocate Thomas Maurer, and Cloud Architect and ICT Security Expert Charbel Nemnom—three Microsoft MVPs who have used Azure in all of its guises on a daily basis—to talk about the journey so far and the future of cloud computing.

Thanks for taking the time to join us guys—it’s very much appreciated. Let’s start at the very beginning. When did you first encounter Azure?

Mark Scholman: I started using it in 2011 whilst working on a website that I wanted to try and host on Azure. At that time, it only had ‘cloud services’ using stateless virtual machines. The only additional way to store state was in a SQL database.

Thomas Maurer: My first experience of the platform was during its year of release in 2010. At that time it was based on the “Red Dog” backend and was mostly addressing Platform-as-a-Service (PaaS) scenarios.

How about you Charbel, what was your initial assessment?

Charbel Nemnom: When I first start looking at it in 2010, the presumption was that Azure was a big virtualization platform running in a huge data center somewhere, but over the years I came to realize that this assumption was completely wrong.

Did you encounter any skepticism in the early days, surrounding both Azure and wider cloud technology?

MS: For me it was a new way to work with PaaS, as I am from an infrastructure background. The ease with which I could publish a website and connect it to a SQL database was simple. But for more advanced users, I think it was perceived as a bit too basic. With the growth of cloud technology, a lot of IT pros—including myself—recognised the danger of our jobs disappearing. As it turns out, I’ve realized those roles never went away, they just changed.

TM: I agree. Since it was only offering PaaS services, Azure was great for new cloud-native applications. However, there was not much you could do with existing classic applications. This changed over to Infrastructure as a Service (IaaS) shortly after the platform started, enabling customers to migrate existing workloads to the cloud. Customers are now able to use cloud-native and modern applications and also bring virtual machines to the Azure platform.

CN: I had a lot of concerns about cloud technology in the early days. There were constant and consistent questions: “How can we trust the cloud provider? Do we have control? Is the data secure up there? What about network latency, availability, resiliency, privacy, compliance and data regulation?” Some of those questions are still asked today, as security is paramount to every business. Cybersecurity is growing and rapidly changing, and it is crucial that the central concepts that frame and define this increasingly pervasive field are understood by professionals who are involved and concerned with the security implications of cloud technology.

In the ten years since Azure’s official launch, has the product evolved as you expected?

MS: Absolutely. It took a while, but we’re getting there. I believe that with the evolution of Azure, Microsoft managed to create a public cloud that can be trusted and managed as an enterprise cloud. Now they have built a cloud that is suitable for start-ups, enterprises and governments.

TM: For me, it has exceeded my wildest expectations. I would never have imagined the global scale, security and services that are available in Azure today. Today, Azure offers over 600 services from IaaS and PaaS, including container and serverless technologies. Microsoft didn’t just focus on new cloud native technologies, but also improved the way we think about classic workloads on Azure IaaS.

CN: Thomas is right—Azure has grown so large, versatile, sophisticated and fast-moving that both customers needing solutions and service providers building those solutions are constantly battling for resources and skills. As Azure is a platform, it continually expands, evolves, and, inevitably, becomes even more challenging to master. The intention is not to say that Azure is impossible to learn and master, but it’s become so vast and central to everything that people can (and often should) specialize. For this reason, Microsoft evolved its education program to reflect the rapid changing of the platform by introducing the new role-based certification which offers a great opportunity to anyone who would like to specialize in any cloud service they like to work with.

How do each of you view the influence Azure has had on the cloud technology industry?

TM: Azure has influenced the cloud industry in many ways. To pick one instance, I think as we build Azure with Hybrid Cloud in mind, we can see that others are now recognizing that Hybrid Cloud is a final state for customers and it is not just an in-between state, before moving everything to the cloud. They are now trying to catch up with Azure in that space.

MS: Also, as cloud technology grew, running a global infrastructure became cheap and easy to do. I think cloud technology was the enabler for the technologies we know today and ones we’ll rely on in the future, such as AI, Blockchain, cloud computing, data analytics and IoT.

CN: I think for any industry today, cloud technology is the next big wave in computing and Azure is a big part of that. It provides better and easier management of data security, since all data is located on a central location or replicated across different regions. Cloud computing increases profitability by improving the resource utilization, and costs are driven down by delivering appropriate resources only for the time those resources are needed.

Can you pinpoint any turning points over the last ten years when Azure stood out as something of a game-changer?

MS: Between 2014 and 2016, a lot of features regarding managing enterprise infrastructures were added to the portfolio. I think that was the moment Azure gained momentum a lot of enterprises on board. With Azure Stack, they also added a unique proposition in their portfolio that’s gaining more and more attention from the market and answering the demand from companies that want to leverage a true hybrid cloud platform.

TM: That’s a tough question, because I think there are so many. I think for me, one of the game-changers we saw was the release of Microsoft Azure Stack, which allows you to extend Azure, and apply Azure services everywhere you need them. Also, with Azure Arc we are now extending our offering even further, by enabling customers to manage their resources on-premises and in multi-cloud environments with our Azure cloud-native management tools.

CN: That’s a really important point. Azure Stack, and also Hybrid Cloud Management, are definite game-changers. Regardless of platform, the Azure ecosystem now looks and feels as though it is running on a native Microsoft platform. This results in superior compliance, role-based action controls, and auditing capabilities, as well as the ability to build and deploy containerized applications across infrastructures whether it’s on-premises, in Azure public or in any other public cloud provider. Another example is the fact that Microsoft has a Cloud Operations and Innovation team that architects and operates their data centers that various cloud services, including Azure, run on. That’s why it’s available across 55 regions in 140 countries.

Finally, what would you like to see next from Microsoft Azure?

CN: I’d like to see improvements around how Azure customers might need to make their services resilient and available throughout the world. People often think that once they deploy something to the cloud, it can never go down and their job is done. It’s likely that isn’t the case for PaaS and IaaS. While Microsoft architects design their data centers with great resiliency in mind, things can happen, and we always need to think about the desired resiliency of the services and architect accordingly from day one. It would be great to see improvement in this area.

MS: Hopefully, they’ll keep pushing the boundaries as they do today. The scale they operate on is unimaginable and I’m really looking forward to the next ten years.

TM: I’d go along with that. We are continuing with the great work the teams are doing, and I think Azure offers a great platform for every person and every organization out there. Enabling our customers to build on our platform, achieve more, build things which were just not possible before and make them more successful, is a key part of that.