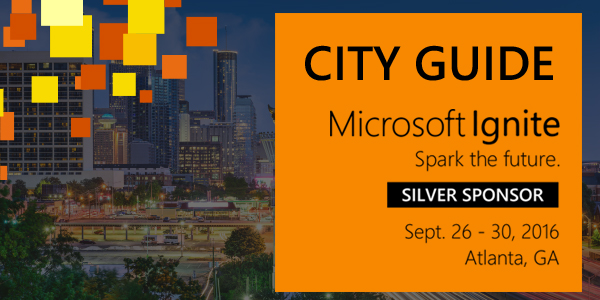 Microsoft Ignite is one of those important tech events where hardcore engineers, senior tech strategists, and even hands-on systems admin get stoked.

The event combines the TechEd series into one major event, its magnetic pull draws in huge crowds of more than 23,000. It’s the ideal platform if you’re looking to make the right tech moves in cloud and mobile, offering education, vision, and guidance on a full spectrum of enterprise solutions all under one roof. And you will enjoy the city of Atlanta too. Atlanta is hot, and not just literally! The climate in September soars to 27˚C/80˚F with a low of around 15˚C/59˚F.  It’s a hot modern metropolis, with a festive nightlife, seven professional sports teams and an abundance of attractions shrouded in its deep Southern roots.

Nigel Frank is proud to be a Silver sponsor at Microsoft Ignite – be sure to meet our Microsoft Recruitment team all week at Booth 152!

If you’re planning to ‘ignite’ your knowledge in Atlanta this September, we’ve tapped into some of the local networks to bring you some fun facts, made some recommendations on world-class entertainment and how to navigate your way around the city –  from the best restaurants to some pretty amazing attractions plus subdued spots to park your laptop. Time zone: (EST) Eastern Standard Time, UTC/GMT -5 hours.

The Georgia Aquarium is like no other, it has one simple claim to fame: it is the largest aquarium in the world! It boasts a 10-million-gallon playground for all types of aquatic mammals including dolphins, penguins, mischievous belugas, mammoth whale sharks, frolicking otters, ethereal jellyfish, sharks and more. Go underwater and experience a sensation usually reserved only for divers, in a tunnel called the Ocean Voyager exhibit. With over 60 other exhibits that showcase a vast variety of marine life including an Aquanaut Adventure, AT&T Dolphin Tales, and Topical Diver.

World of Coca-Cola is the attraction for everything Coke and more! Visitors can get involved and go behind-the-scenes experiencing its pop culture, historic advertising campaigns and Trademark brands such as Coca-Cola, Diet Coke, Cherry Coke, Coke Zero. Get immersed in the bottling process, and even create your own Coke art with the “My Coke Art” exhibit. A Taste It Gallery with five tasting stations feature drinks from Europe, Asia, Africa, Latin America and North America where you can sample and taste test more than 100 beverages. World of Coca-Cola is also home to the vault that contains the “Secret Formula.”

The CNN Center is the world headquarters of the international news channel.  The attraction offers a 50-minute guided walking tour that gives you an opportunity to explore behind-the-scenes of CNN’s global network, with telling insights into the complexities of news production. Visitors will see the world’s longest freestanding escalator, and if you’ve ever fancied being a presenter, then try your hand at “cold reading” the news in Studio 7E. Other features include watching a newscast as it occurs and a personal snoop into the station’s control room, all complete with real-time direction plus an explanation of the techniques and technology used.

The Fernbank Museum of Natural History has so much to offer. Surrounded by a 65-acre (26.3 hectares) forest, it boasts an observatory, a planetarium, an IMAX movie theater (which is home to the biggest movie screen in Atlanta), and the largest dinosaurs ever discovered.  Features include Sensing Nature, an experience that helps visitors become aware of their senses and interpret the world around them, a virtual waterfall, and an exhibit known as NatureQuest which lets you see the inside of a mighty red oak tree.

Spanning almost 40 acres (16 hectares) in Grant Park, Zoo Atlanta is the oldest cultural attraction in Atlanta and a favorite of both locals and tourists.  Its natural habitats include more than 1,000 animals representing some 200 species from around the world, and its one of a few selective zoos in the US to house giant pandas. Features include interactive wildlife shows, a Zoo train, and a petting zoo, but it’s best known for its gorillas, more reside at the zoo than anywhere else in the United States.

Completed in 1982, visitors can pay tribute to the late, great Dr. Martin Luther King Jr. at this National Historic Site. The site showcases his important civil rights work where you can hear recordings of Dr. King’s sermons and speeches which play inside the church. The King Center also houses a D.R.E.A.M Gallery and the tomb of Dr. King.