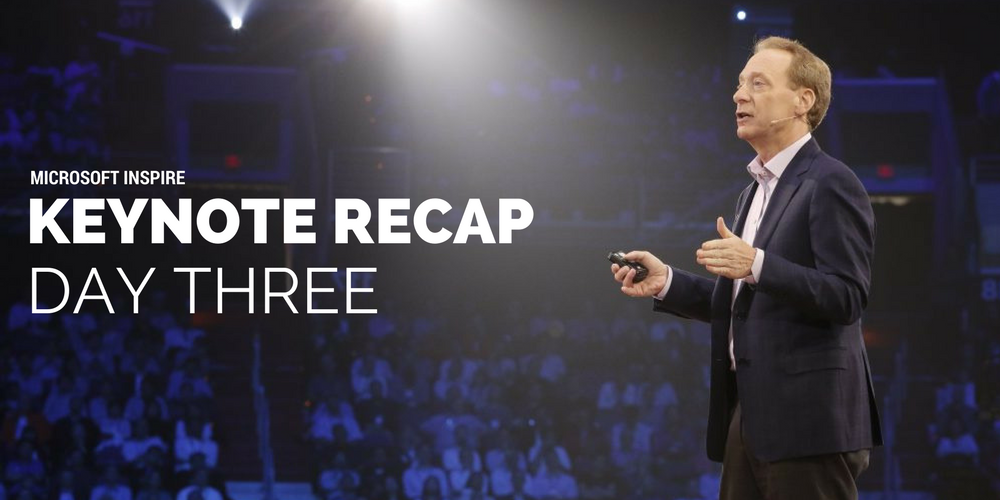 While the second half of the speech saw Smith sit down with leading political scientist Ian Bremmer to discuss global affairs, the keynote also touched on themes such as cybersecurity, and Microsoft’s changing relationship with its partners.

The closing keynote kicked off with a stirring spoken word performance from Sarah Kay and Phil Kaye of literacy initiative Project Voice, and another stunning orchestra performance, this time from The Hans Zimmer Live Orchestra, who performed a breath-taking piece of music from David Attenborough’s Planet Earth II.

As Smith took the stage before thousands of Microsoft partners and viewers around the world, he spoke of the challenges we meet in today’s world, from cyber threats to political instability. But hope, Smith says, is all around us. And in the face of such challenges, we must show resilience.

Smith illustrated his point by detailing the life and ingenuity of Warren Johnson, the Wisconsin college professor who invented the first thermostat. Johnson founded Johnson Electric Service Company, now Johnson Controls, in 1885, and though the business has faced economic difficulties, it is now using digital technology to transform itself.

After 132 years in business, Johnson Controls is now focused on creating more environmentally efficient buildings, and is doing so by leveraging technology; where data was previously gathered on a clipboard, Johnson Controls now employ Azure to provide connectivity to machines and base all their data in the cloud. “We’re doing things today,” said a Johnson Controls executive, “that I really couldn’t have dreamed of 34 years ago”.

The future of cybersecurity

Smith then applied this idea of resilience to one of the biggest challenges facing the technology sector today; the evolving threat to cybersecurity. The long-standing concept that cybersecurity breaches were the work of  “teenagers in the basement hacking their way [into networks]” has fallen away in the face of the modern reality of cybercrime; it is organized, it is sophisticated, and it is omnipresent.

Though Microsoft works tirelessly to combat security breaches, with data about the hundreds of billions of emails and other pieces of information constantly being fed into the company’s intelligent security graph, there’s one thing you can’t always account for, remarked Smith; human nature. “Every company has at least one employee who will click on ANYTHING.”

Smith also spoke about Microsoft’s Digital Crimes Unit, which is using the law to stand up for people’s rights and protect them against cybersecurity threats. Since last July Microsoft have pursued multiple actions in court to secure domains on six continents in an attempt to shut down cyber-criminals.

He also touched on security issues that have lately arisen through the use of outdated technology, such as Windows XP. Employing outdated software and solutions, Smith said, was akin to trying to shoot down an airplane with a 19th-century cannon. “You can’t defeat the threats of the present with tools from the past,” he stated, subtly imploring users to upgrade their solutions in order to protect themselves – though speaking at a Microsoft Partner conference, he was preaching largely to the converted.

“We need a digital Geneva Convention that will call on the governments of the world to pledge that they will they will not attack citizens with cybersecurity measures in times of peace.”

Smith underlined that Microsoft’s position on global security is 100% defense, 0% offense: “We will not help any government anywhere to attack customers. In times of growing nationalism and populism, we need to see the world as a whole, we will best serve the world as an industry. Look to us as a neutral, digital Switzerland.”

He also spoke of the need for sustainability, particularly in the technology sector. “Governments may waver, but our commitment to sustainability remains steadfast. We want to build a sustainable planet and address the needs of people,” Smith said, giving the example of Microsoft’s project to bring reliable broadband connectivity to 23 million people living in underserved areas of rural America.

Birth of the One Commercial Partner program

Launched in February, the new commercial initiative rolls together teams across the company, consolidating many of its partner and services teams and forming a new digital team specifically focused on Azure. The company has been working to reorganize their partner services for several years, ever since CEO Steve Ballmer launched his One Microsoft plan in 2013.

Detailing an eye-opening meeting with partners in Denmark, Schuster spoke of how partners had changed, and Microsoft had not kept up; instead, they were getting in their way. She told of how the company had been constraining themselves through licensing, segmentation and geographic boundaries, and had also become complacent with their partner relationships.

In response, Microsoft is making the biggest change to their our sales model that they’ve have made in over a decade, having been faced with the same questions from partners again and again: How do we engage with our field? Why are you so complicated? How do we show up better together to the customer?

“Build-with – Whether you need to build a practice, build IP, or build your capabilities, our team of partner development professionals is there to support you. They have business model expertise and are supported by technical and specialist resources. Their mission is to get the right resource to you at the right time to support your success and growth.

Go-To-Market – Our team of partner marketing experts will help you bring your solutions to market through offers. They will orchestrate with the teams that build with you on the market opportunity and the teams that sell with you on customer needs.

Sell-with – We are adding a new role to our partner business. Channel Managers have responsibility for connecting the right partner solutions to the right customer at the right time. Armed with best practices, marketplaces, and solution maps, they will work hand in hand with Microsoft sales teams and customers of all sizes and across industries.”

Schuster then expanded on the big stat that has been bandied about during Inspire: $4.5T of opportunity through digital transformation. Less than 1% of the world’s data is analyzed, she stated, offering a huge opportunity for expansion in cognitive services, big data, AI, and analytics.

In the face of huge change and restructuring, Schuster closed by asking three things of partners: Give us feedback, use the tools, and perhaps most importantly, be the change.